The story of the 500 French citizens who traveled to settle in the Ohio Country in 1787 and found themselves living on a four acre tract of land in Gallipolis. 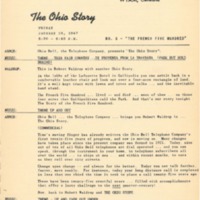