The story of Ernest Ball of Cleveland whose songs are music captured the heart of the nation and his mother: Mother Machree. 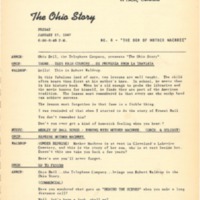